Somewhere between our house and the babysitters house we had a neighbor with a baby girl they had nick named Puffin. I recall being told that Puffin had died and gone to heaven. At the time, of course, I had no concept of death or heaven so I assumed that Puffin was perched on a large wad of cotton (cloud) somewhere in the sky above us and was looking down on us, still very much full of life. I have a vague recollection that my foot slicing occurred on Puffin’s driveway. There was a black and white photo of Puffin, in her mother’s arms, standing in a doorway, but it has gone away. She looked just like this. 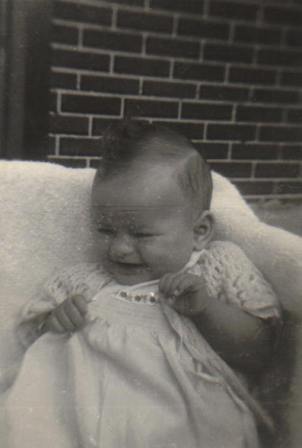 This is not Puffin, it is my sister Ivy, before she grew hair and became evil. She bears a strong resemblance to her grand-niece, who is also named Ivy. Perhaps they are the same person, bridged through time and space. Thankfully she escaped Puffin’s fate. I was not yet a seedling when this photo was taken.

One thought on “Puffin”