“If you have lived upon the earth, whether your name is known to history or not, you are a part of it and your mark is in the world; in the hearts and mind and memories of those that loved you and in legacy for all those that come after. Be you prince or be you pauper, all that matters in life is life, all other glories are vain and soulless.” 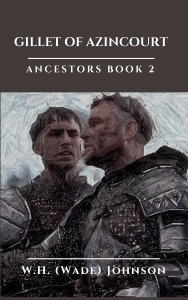 Gillet Charron hoped only to keep his village safe from freebooters and highwaymen; he never dreamed to raise his sword against a King. He was no fighter, just a simple cartwright. It was chance that brought him to save his new Lord and it was that spirit that binds men as brothers that brought Gillet and his men of Meaux, The Circle, to stand with their countrymen against a great and ominous foe from across the water.

The battle of Agincourt, or Azincourt as it is known in France, is known among the most famous of the ‘Hundred Years War’ between France and England. Ongoing disputes and claims to thrones and territories, made and broke alliances, seeded corruption, plots, assassination and fueled conflicts, both civil and between countries. Agincourt is written in history and though his name does not find its way into records or annals, Gillet Charron, known as Gillet of Azincourt, was a hero to his townsfolk, until all memory of him faded from the generations.

In 1415, Gillet Charron, a man of common blood, found himself unintentionally linked to a young man of noble blood. Through his kind intention and good deeds, he was drawn into a conflict beyond his imagining. During their brief time together the two men became good friends and their families became bound together through history.

Available as an eBook at  Kindle and in paperback at Amazon