For some reason my evil sister seemed to enjoy very many birthday parties. There are many photos of her celebrations back in the old days. Here she is proudly showing off her fifth birthday cake. A house party was arranged and she had a swell time with her friends. I was invited to the party of course, but that is only because we lived in the same house and there was the filial obligation. Yes, she was lucky to have nice friends, despite her evilness. Unlike my sister, I never got a birthday hairdo or new birthday shoes.

I didn’t even have any birthday friends of my own and was compelled to clutch firmly to the meager birthday treats I was given, lest they be ripped from my fingers by my sisters cruel friends. Bad enough that I was forced to dress like an old man with trouser suspenders, high water pants and ankle boots, but to be humiliated by being pinned against a bedroom dresser by my sister’s Goliath ogre-like buddy was just too much. Just look at the pathetic plea for mercy on my little face. And isn’t it curious that these three harbingers of dread are all in sweaters while I am forced to suffer the cold in short sleeves. 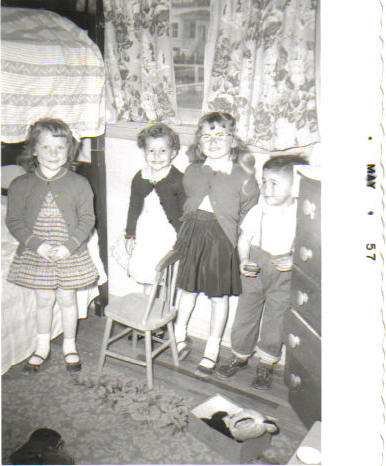 Sadly I was forced to suffer many more of these indignities. I’ll show you more later. Though I have searched and searched through old family photos, there doesn’t seem to be a single picture of one of my birthday parties. Strangely, I have no recollection of ever having a birthday party after that very first one, when I was two, in Bowness and acted badly with my party guest.

One thought on “Birthday Parties”