My parents were just starting out, really. I am the second of three children.  Born in Regina in November of 1953. I often wonder how it is that I came to be born in the middle of nowhere in the dead of winter.  My parents’ home town was Winnipeg. This is likely where my father signed up for his stint in the armed service. He had served a brief spell in the army and there was some travelling about.  I’m told my earliest infancy was spent living in a trailer on the coast of the Atlantic near Halifax. There was a story of how I could pee from one side of our little trailer to the other while having a diaper change.  And how I played with a fresh cod just fished out of the ocean from the shore near where we lived. I have no recollection of this. These first couple of years are a mystery to me and there is nobody alive now that can tell me the detail of how my story began and of those first two years. Why did we go from Winnipeg to Regina, where I was born, and then to Halifax and then to Calgary (Bowness) where my first memories began? 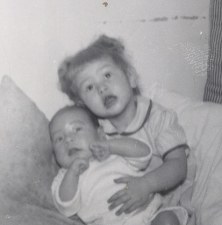 This is what I looked like about a month after emerging from the womb. You can see that I’m quite terrified to be in the grasp of my 20-month old sister. I wonder if this photo was taken in Regina or Halifax or somewhere in between. She’s pretending to look innocent but is probably sticking a diaper pin into my tiny buttock.

Novelist, author of the Ancestors series of books (and many other things), husband, father, grandfather, amateur genealogist, shamelessly bad fair-weather golfer, retired IT professional and traveler in time. View all posts by W.H. (Wade) Johnson